I always look forward to opening my private messages on facebook, which are usually full of dudes with horrid pickup lines. Today, I found this little gem by Von’te Banks. 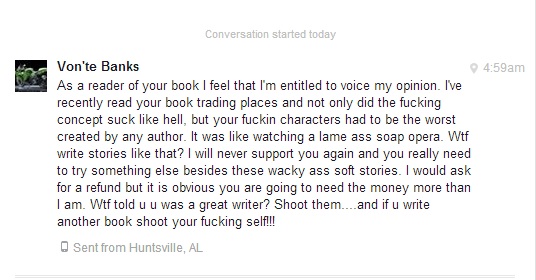 Really? Shoot your fucking self? I don’t think I need to go into how repulsive this is since suicide and depression are real problems for real people…and that families suffer.

Wait, it gets better.

So I clicked over to Amazon to find (s)he left 1star reviews on Books 2 & 3 but no review on Book 1. First, they aren’t verified purchases, so I’d like to know (if (s)he actually read the books) how she got his/her nasty little hands on my books. Second, (s)he’s only ever left two reviews – only on my books. I went ahead and took a screen shot just in case my little vixen decided to correct that error.

Now everyone is certainly entitled to their opinion and if you hate a book so much as to leave a 1-star review, that is your prerogative. However, his/her motives are unclear but her goal was clear.

Does this bother me? Hell no.  Clearly, this person has some issues. Telling someone to kill themselves is as low as it gets. Because these aren’t verified purchases and due to the fact that she forgot to blast Book 1.

If it’s publicity (s)he wants, I’ve just given it to him/her. If it’s an attitude adjustment (s)he needs well… 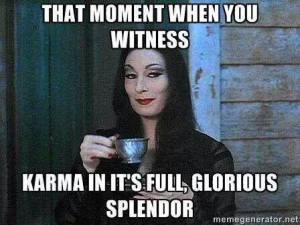 8 thoughts on “It takes thick skin to survive the vipers”